After Lille we travelled to Amiens by train. 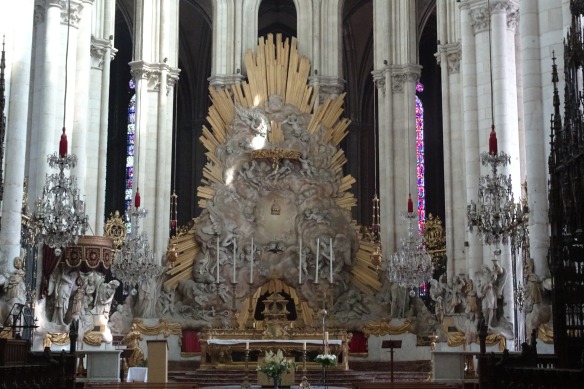 The hotel we’d booked seemed a lot further away from the station than it said on the website. When we finally got there we thought it was closed because there was a group of tradespeople having their lunch in what should have been Reception. Eventually we gained access through a sided-entrance. After checking in on Level 1 we tried to get to our room on Level 8 and found that the sensor lights from the elevator to our room didn’t engage until we were well into the completely dark corridor. Then there was the adjoining door between our room and the next which periodically rattled furiously and loudly and no amount of wedging could silence it. I got no joy when, torch in hand, I made my way back to Reception to report that and the fact that the wifi didn’t work in the room. Not a good start to our stay!

Our hotel overlooked the River Somme, so we started our afternoon walk along its banks towards the old town. We visited Notre Dam cathedral which commemorates the troops who fought there, including Australians, and is the home of the Crying Angel statue which became famous as a postcard sent home by the troops. We could see Jules Vernes’ Circus and house but couldn’t access it due to major roadworks between us and them. Later we walked through Hortillonnages  community floating gardens and park.

This is a long story about a short visit to a very important though remote place. Our reason for staying in Amiens was to get to Villers-Bretonneux to visit its Military Cemetery, the Australian National Memorial and the Sir John Monash Centre.

Getting there was a challenge. The first train was cancelled and there was a two-hour wait till the next one, so we bought our tickets, went away and came back to find that the train had been changed to a bus. The directions we were given to the bus station were that it was outside the train station on the right. It wasn’t! After panicking , separating, and running all over the place, Brian finally found it under the train station. We only just made it.  I even had to run – the first time since my accident!

The bus dropped us and another Australian couple off at Villers-Bretonneux train station which was closed. Julie and Jeff from Sydney were due at a meeting at the John Monash Centre. There were no taxis. We both tried the phone number on the station door but couldn’t get through, so we walked back up to the town and inquired at the ‘Melbourne’ shop we’d passed earlier. We were directed to the taxi ‘shop’ around the corner. This was unattended but displayed another phone number which we both tried again unsuccessfully, so we asked staff at a nearby pharmacy who sent us to the museum another street away. This was the Victoria School Museum. The receptionist rang the taxi firm but it would be 50 minutes before one arrived. A tour guide dropping off some clients to the museum very kindly saved the day and offered us a lift to the cemetery. We accepted her offer and took her advice to book a taxi to pick the four of us up from there at 5.30 pm.

Once there we split up, arranging to meet again at the entrance in time to catch the taxi.  We walked through the cemetery to the memorial which was familiar to us from all the Anzac Day ceremonies we had seen broadcast from there over the years. Brian climbed to the top of the tower but I didn’t want to risk it, my hip and leg having had more than enough of a workout earlier running for the bus! 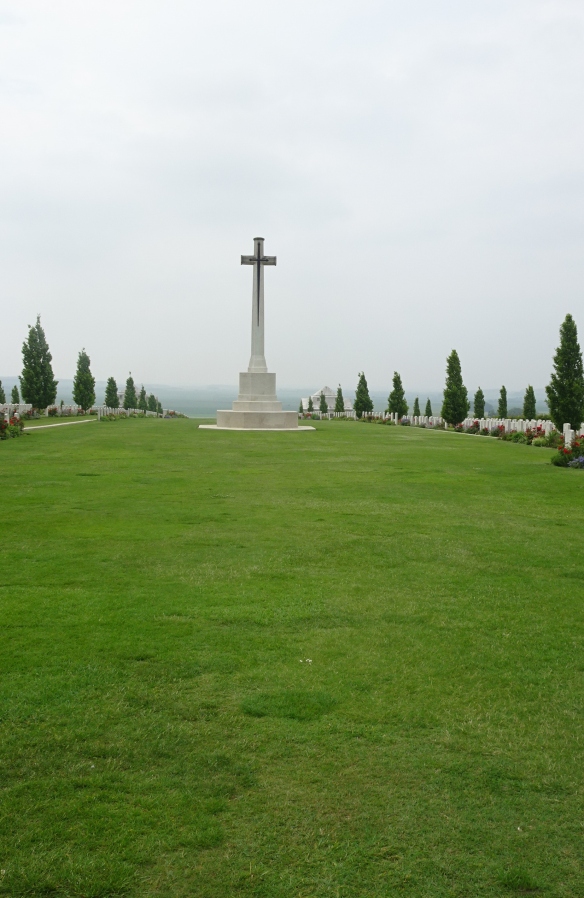 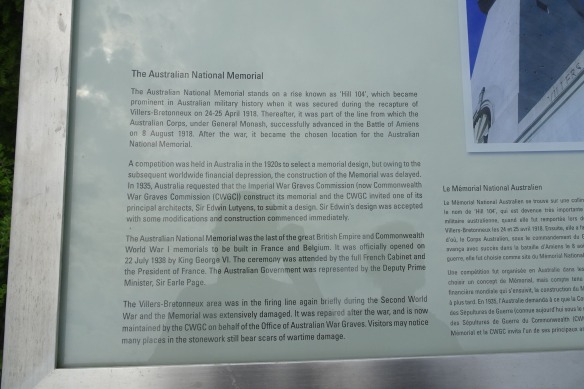 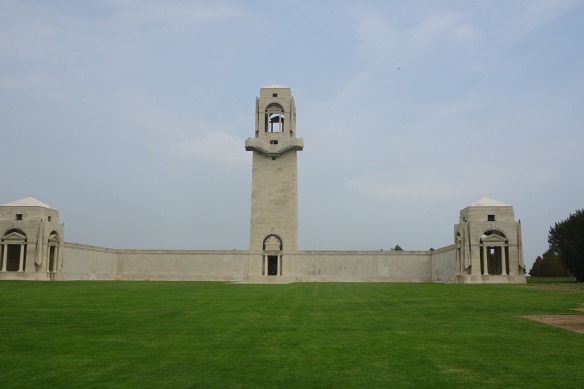 The new John Monash Centre was an outstanding interactive experience culminating in a 360 degree video, complete with special effects like surround sound, smoke etc.  It’s free to enter and you can use your own earphones or hire some from the gift shop. The staff are very helpful. It was through them that I found out about the taxi situation. When you order one it has to come from Amiens, not the local town, which is why it takes so long to get one and why it is so expensive! 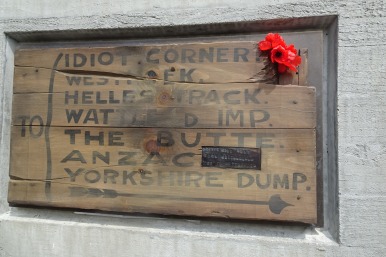 When we had finished we went back to the entrance to eat a very late lunch and wait for the taxi. One did come while we were there but it was 45 minutes before ours was due, so we assumed it was for someone else. However, when ours didn’t show up… We waited until we reached the stage where we had to opt for the 40-minute walk or risk missing the train back to Amiens where Julie and Jeff had to catch a connecting train to Paris. We were cutting it fine and again, for the second time that day, I had to run, but we caught it and Julie and Jeff made their connection with at least two minutes to spare!

This site uses Akismet to reduce spam. Learn how your comment data is processed.